When you travel to places like the Everest Region, it’s hard not to be impressed by the amazing scenery, the sense of history and the literal karma that you get by being in this Buddhist region. For us however, the most wonderful thing that we get from our regular visits to the country of Nepal, is contact with the people. They are unwaveringly kind, humble and often less fortunate than most of us in the developed world. Whilst striving to do the best for their families, they welcome us into their lives, making for some of the most fantastic friendships and memories that we could wish for.

Regrettably, even in this peaceful and caring environment, not everyone gets a fair chance or is treated well: Porters, poorly dressed and underpaid, mostly of lowland regions (and not Sherpa) carrying 100Kg up to Base Camp; young children, working for their impoverished families, instead of gaining the education that they deserve. There are too many examples.

Trek8848 is not a charity. But equally, we are not driven by our spreadsheet. Our main aim is to maintain our links with Nepal, build on the friendships that we have made over the years and hopefully, when it all works out, do some good, and perhaps, in some way, improve our own personal piece of ‘Karma’.

We first met Bhabi in 2011. He was a small boy then, poorly dressed and weighing only around 30Kg. At the bottom of Namche Hill, he was gasping for air and probably hope, whilst struggling to carry more than his body weight in rum, beer and sundries to one of the local shops in Namche Bazaar. His mother had left their home, leaving his father no other option than to ask Bhabi to help him to provide for their family. This story is not unique. Most people walk by, but the members of our team decided to help. It was one of the most touching moments in my life. We carried his load, bought him new clothes and fed him. It felt great to be helping.

After our goodbyes, we thought a lot about Bhabi and came to the conclusion that we simply had to do more. A year later, with the help of Thundu, Marie-Kristelle located him again in his village of Tok Tok. It was then that we offered him the opportunity to go the Hilary School in Khumjung. Both he and his dad were ecstatic.

Bhabi Ram is now 17 years old, speaks brilliant English, has grown almost as tall as Rob and has hopes of going to University. Maybe one day he will be a helicopter pilot, he says. Whatever he becomes, he now has a chance and you may well even get to meet him on one of our treks – which he often joins when there are school holidays.

This is the essence of the Khumbu and everything that Trek8848 stands for. 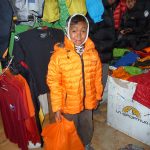 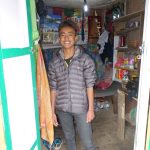 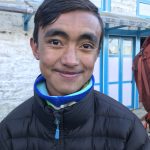 It would be remiss of us if we were not to mention Pradip, if not for the contribution of Trek8848, but for that of two trekkers who came with us to Everest Base Camp in 2013. On seeing Pradip in very similar circumstances to Bhabi, but this time near Lobuche on a cold and windy day, with no thought of her own comfort, Anne ripped off her down jacket (we were on our way down to warmer temperatures) and selflessly gave it to him. She organised adult porters to carry his load and paid him his expected salary for that day. It was an extraordinary act of kindness to witness.

A year later, Anne and Gilles contacted us and asked us to “find” Pradip. They knew what we had done for Bhabi and wanted to do the same for Pradip. Not an easy feat I was thinking, but with the help and dedication of Thundu, who quite selflessly wanted to help us to help somebody else – and a photo of our ‘missing person’ – we eventually found him. Just 13 years old and working in fairly terrible conditions in a lodge at Gorak Shep (over 5000m in altitude), it was hard to convince him that the offer was for real. Thankfully, with Thundu’s words and agreement from his family, Pradip is now also at the Hilary School, forging the education and chances in life that any normal child should be expected to have. Thank you Anne and Gilles. 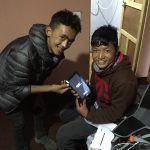 On 25 April 2015 at around 1pm, an earthquake of 7.8 magnitude on the richter scale, brought chaos and catastrophe to Nepal. Rob, Marie-Kristelle, Thundu and their climbing team mates were at camp 1 on Everest at the time. To their great fortune, they all came through this terrifying ordeal unscathed. At Base camp, many people were much less fortunate. 18 people were killed and multiples injured. Amongst the dead were 3 dear friends and teammates: Pasang Temba Sherpa, Tenzing Sherpa and Kumar Rai. We were and continue to be devastated.

After our escape from danger and return to home, we felt strongly that something had to do be done to help Kumar’s family. Some funds had been secured for his wife, but nothing had yet been arranged for his 4 young children. A good education is prized in Nepal, but this was not something that they could get in Chheskam, the small village where they lived. It was clear however, that their mother needed them close to her at this time, so offering good schooling in a distant place such as Kathmandu, was going to be of little help to the family. We realised that our efforts should be centred on improving the school in this incredibly remote, yet important village in the Solukhumbu valley.

Chheskam lies some 4 days walk from Lukla and, at the time, was only reachable by foot or by helicopter. A dirt road has since been built, but to get there remains a challenging adventure – to say the least! (you can find more on our latest adventures to Chheskam in the blog section).

Fund-raising took place and over $40,000 CAD has been raised…

The first part of the part of the project was to rebuild that school (it had been badly damaged by the earthquake). The reconstruction was completed in 2016 and major improvements were made to the building. Along with a good friend from Nepal, Dre Milan Maharajan, we coordinated and supervised every step of the project. We wanted to ensure that the money donated was used in the best possible way and uniquely for the school.

When we then visited the village, we couldn’t have been happier with the results. But more importantly, we witnessed the importance of the school to its villagers.

What was initially supposed to be a relatively small project took another dimension. We were happy that they had a safe place to study, but we wanted to do more and improve the quality of their education.  Despite a group of motivated and well-informed teachers, this is an impoverished area of one of the poorest countries in the world, so with such limited resources and isolation, the challenges to providing an exceptional education are significant.

After all the time we have spent in Nepal, we came to the conclusion that improving their knowledge of English was probably the best way to broaden the children’s opportunities. However, having an educated teacher who speaks reasonable English is a big challenge to find in this extremely poor and remote community, particularly when looking at the school and its legacy over the longer term.

After discussion with the villagers and the school directors, we believed that online education was the best way to achieve our goal. However, this sounded like a big challenge as there was no internet connectivity (not a satellite dish or cable in sight!), nor computers(!) in the village and only a thready cell reception, 15 minutes walk (up a mountain side) outside of the village.

On our return home, we started getting in touch with companies and organisations that might be able to help us.

We were extremely lucky to receive the support of Corporation for Community Connections (CFCC). They are a registered charity dedicated to refurbishing and distributing corporate computers at no cost to the worthy recipient. They provided us with over 60 laptops and helped us enormously with the logistical challenge of getting them from Canada to the village. Without CFCC, the second phase of our project wouldn’t have been possible.

We have also received the support of Everest Link, an internet providing company based in Kathmandu, who has set up an internet connection in the village using a commercial satellite connection.

So now, the children of Chheskam receive online classes with teachers based in Kathmandu and in Canada. To the best of our knowledge, it is the first “connected school” in the entire country.

Guru, the director, has proudly told us that since the computed lab has been established, the quality of the education has improved and Chheskam Shree Secondary School won the best school in the Mahakulung district. It has also gained popularity amongst local children and there are now over 800 pupils attending the school.

Our next project is to build a hostel for the students. Some of them have to walk over 4 hours every day to attend classes.

It is a great honour for Trek8848 to be leading on this incredibly important project, and should you wish to contribute, whether a participant in one of our treks or not, you are warmly welcome to. Please contact us for more details. 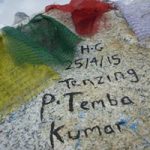 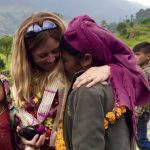 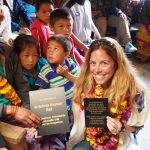